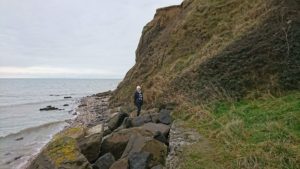 Following the sinking of a fishing trawler off the north Dublin coast near Balbriggan this morning, Cllr Sharon Tolan called on Meath County Council to liaise immediately with their colleagues in Fingal, to assess the potential risk of pollution to the East Coast.

The 12m vessel Atlantic Osprey drifted onto rocks just south of Balbriggan harbour at about 5am on Monday morning and sank about three hours later, after five fishermen were rescued safely.

“I’d like to congratulate the Irish Coast Guard and the RNLI in rescuing the fishermen safely. However, it is important that authorities do all they can to ensure that none of the 400 litres of diesel on board leak into our seas.  We must assess and monitor the potential risk to marine life and indeed our various breeds of birds all currently feeding on our coastline and do everything we can to protect them.” stressed Tolan.

Fine Gael Councillor Sharon Tolan has also called on Meath County Council to immediately assess continued coastal erosion, following reports from locals of serious erosion at Ben Head. Councillor Tolan visited the area on Sunday and has called on the council to monitor the situation and assess what measures can be taken to protect the iconic location on the Meath coastline.